The idea for this book, at nearly twice the length of the longest of the three earlier volumes by Knight listed here, was "simply to put together the biggest and most comprehensive collection of good science fiction that I possibly could", as he says in his introduction. Like Anthony Boucher's Treasury of more than a decade earlier, it includes full-length novels, and the contents are divided into two "books", though unlike Boucher these are published in a single physical volume.

Knight's introduction also claims, "I think I have achieved a more faithful portrait of the field than ever before", and it is curious to note that this volume was published two years after the first Science Fiction Hall of Fame. 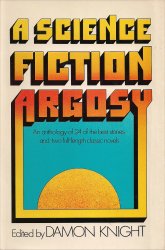