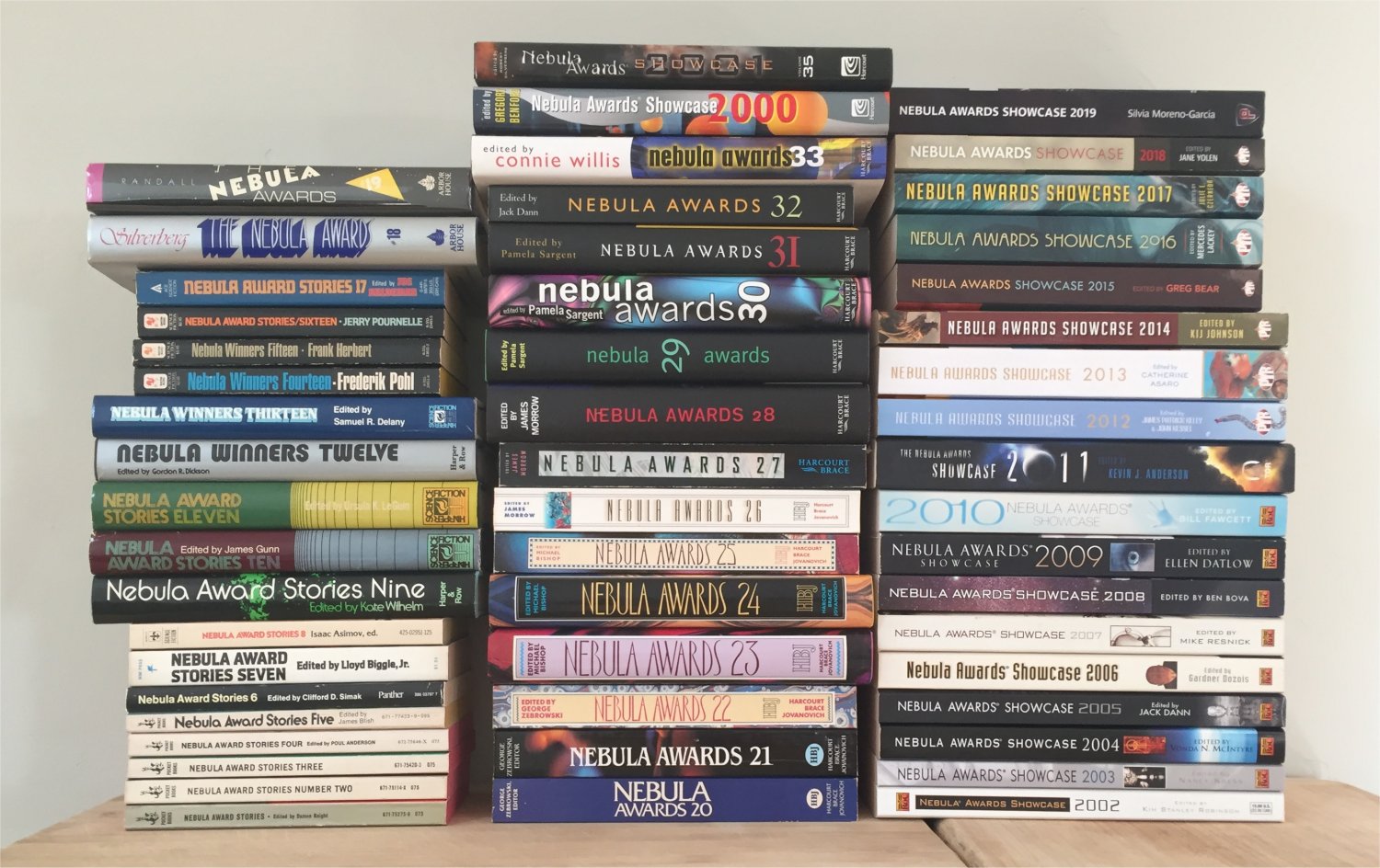 The Nebula Awards anthologies are the longest running annual series by far, though they differ from books in other series in being edited by someone different for most volumes, and for changing in details of content considerably over the decades.

The Science Fiction Writers of America (SFWA) was founded in 1965 and soon created the annual Nebula Awards and their associated anthologies as a funding mechanism for the organization. That each year's awards would support a single anthology is perhaps why the Nebulas established four categories, one for novel and three for different lengths of short fiction, the better to populate each book with several winners. (The Hugo Awards, beginning over a decade earlier, had only one or two short fiction categories until the late 1960s, when they adopted the three categories of the Nebulas.)

Each book includes the Nebula winners in the novella, novelette, and short fiction categories, and some number of additional nominees -- and in some cases, in the early volumes, other stories selected by the editor that were not actual finalists. Beginning with the second volume there were often, though not always, essays on the year's novels or the current state of science fiction. Volume 17 included an excerpt from the winning novel, and the two winners of the annual Rhysling Awards given by the Science Fiction Poetry Association. With the move to publisher Harcourt Brace Jovanovich for volume 20, inclusion of the Rhysling winners became permanent. Later volumes intermittently included winning novel excerpts, or commentaries by their authors, and occasional essays on the year's film, in memoriam summaries, tributes to the year's SFWA Grand Master, etc. With rare exception excerpts from the winning novels became permanent with volume 33; excerpts from the winners of the Andre Norton Award, for YA novel, were added with the 2010 volume.

However the most recent, 2019, volume drops all these various features, consisting only of the editor's introduction, 13 stories, and biographical notes on the authors.

The combined index below omits the novel excerpts, but includes the novellas that are excerpted in a couple volumes.

US publication of some of the early volumes was erratic, allowing UK editions from Gollancz to appear first. There were no UK editions after volume 16. There were US paperback editions of all volumes up to 18; volume 19 is the only one not to have issued in paperback in the US. With volume 20, Harcourt Brace published simultaneous or near-simultaneous hardcover and trade paperback editions. Since the 2002 volume all books have been trade paperback originals. (The photo shows paperback reprint editions of several early volumes and a mix of Harcourt editions.)

Most reprinted authors (not all of them for winning stories): Harlan Ellison and Joe Haldeman, 11 each; Nancy Kress, Robert Silverberg, and Connie Willis, 8 each; then Bruce Boston (for poetry), James Patrick Kelly, and Gene Wolfe, 7 each.