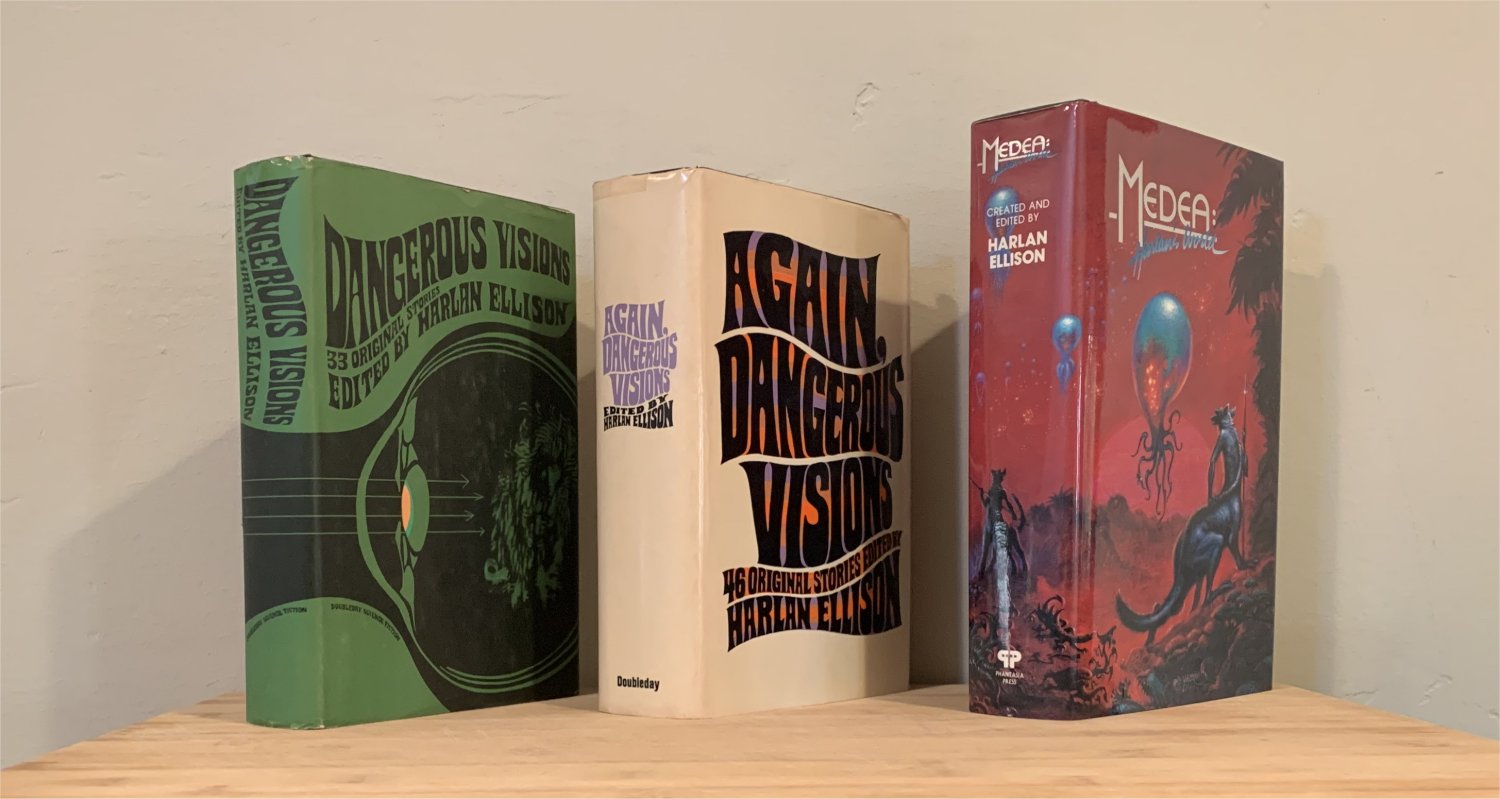 Dangerous Visions is possibly the single most famous anthology in the history of science fiction, which is all the more remarkable because it was an anthology of original, never before published stories. Harlan Ellison, already a well-known short fiction and TV writer (but before he had won any of his many awards), conceived of the project in response to suggestions from Norman Spinrad and Robert Silverberg, his own failed effort to do such an anthology for Regency Books when he was editor there, and with a desire to gather stories too controversial or dangerous for the SF magazines of the era. He also wanted to define what was becoming known as the "New Wave" in SF in contrast to what Judith Merrill was doing in her anthologies, and Michael Moorcock was doing at New Worlds magazine.

The book features two introductions by Isaac Asimov, a book intro by Ellison, and a long, chatty introduction by Ellison to each story, often concerning his relationship with the author. And each author provides a short afterword, usually about why they wrote the story.

The book won a special award at the next year's World Science Fiction Convention, and several stories won awards: Fritz Leiber's both a Hugo and a Nebula, Philip Jose Farmer's a Hugo, and Samuel R. Delany's a Nebula.

At the publisher's behest Ellison did an even larger sequel, using none of the same authors. Ursula K. Le Guin's novella won a Hugo, Joanna Russ's short story won a Nebula, and Ellison received another special convention award.

Notoriously, Ellison planned a third volume, The Last Dangerous Visions, mentioned in the introduction to the second as due in six months. It was never finished and went unpublished, even as Ellison continued to buy stories for it for years; Wikipedia's entry summarizes its fate, with a lengthy list of stories acquired for the book.

Medea: Harlan's World is something else entirely. In 1975 Ellison hosted a series of extension course "Ten Tuesdays Down a Rabbit Hole" at UCLA. On one of these evenings he hosted, on stage, Robert Silverberg, Frank Herbert, Thomas M. Disch, and Theodore Sturgeon with the assigment to plot stories set on a planet whose specifications had been earlier assembled by Hal Clement, Poul Anderson, Larry Niven, and Frederik Pohl. The result, a decade later, was a book that includes the seminar transcript, feedback from the audience, and stories by those eight authors, Ellison, and two others -- all, by that time, having been published in various magazines and original anthologies (as indicated in the combined contents list below).

(The photo shows book club editions of the two DV volumes, and the Phantasia Press trade edition of the third book.)