The Fantasy Hall of Fame

This Fantasy Hall of Fame has a subtitle, "Chosen by the Members of the Science Fiction and Fantasy Writers of America", which distinguishes it from the unmentioned earlier Fantasy Hall of Fame volume. It differs from all the previous Hall of Fame volumes in that it is not designed to supplement the history of any award, but rather to recognize the name change of the prior Science Fiction Writers of America (SFWA) to include fantasy, a change which occurred in 1992. A poll similar to those for the SF Halls of Fame was held of the current membership, with the scope extended to works published as late as 1990. (Though numerous fantasy stories had won the Nebula even before SFWA changed its name.)

Again, Silverberg's rules allowed one story per author; as he notes, otherwise Avram Davidson's "Or All the Sea with Oysters" would also have been included.

There are just four overlaps with the previous volume: the stories by Robert Bloch, Avram Davidson, L. Sprague de Camp, and Theodore Sturgeon. 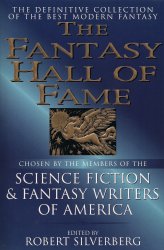