Gardner Dozois' second volume for St. Martin's, like Silverberg's second Arbor House volume a decade before, was a volume of short novels, or novellas. Thus, longer, though fewer, stories than in his first volume. The scope is roughly the same as in the first volume: late '50s to early '90s. And as in the first volume, Dozois mentions in his introduction stories he might have included were they not already over-exposed (or unavailable), and emphasizes that his selections are those that appealed to him personally, as a reader. 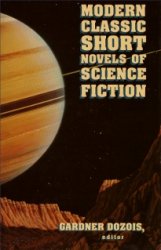