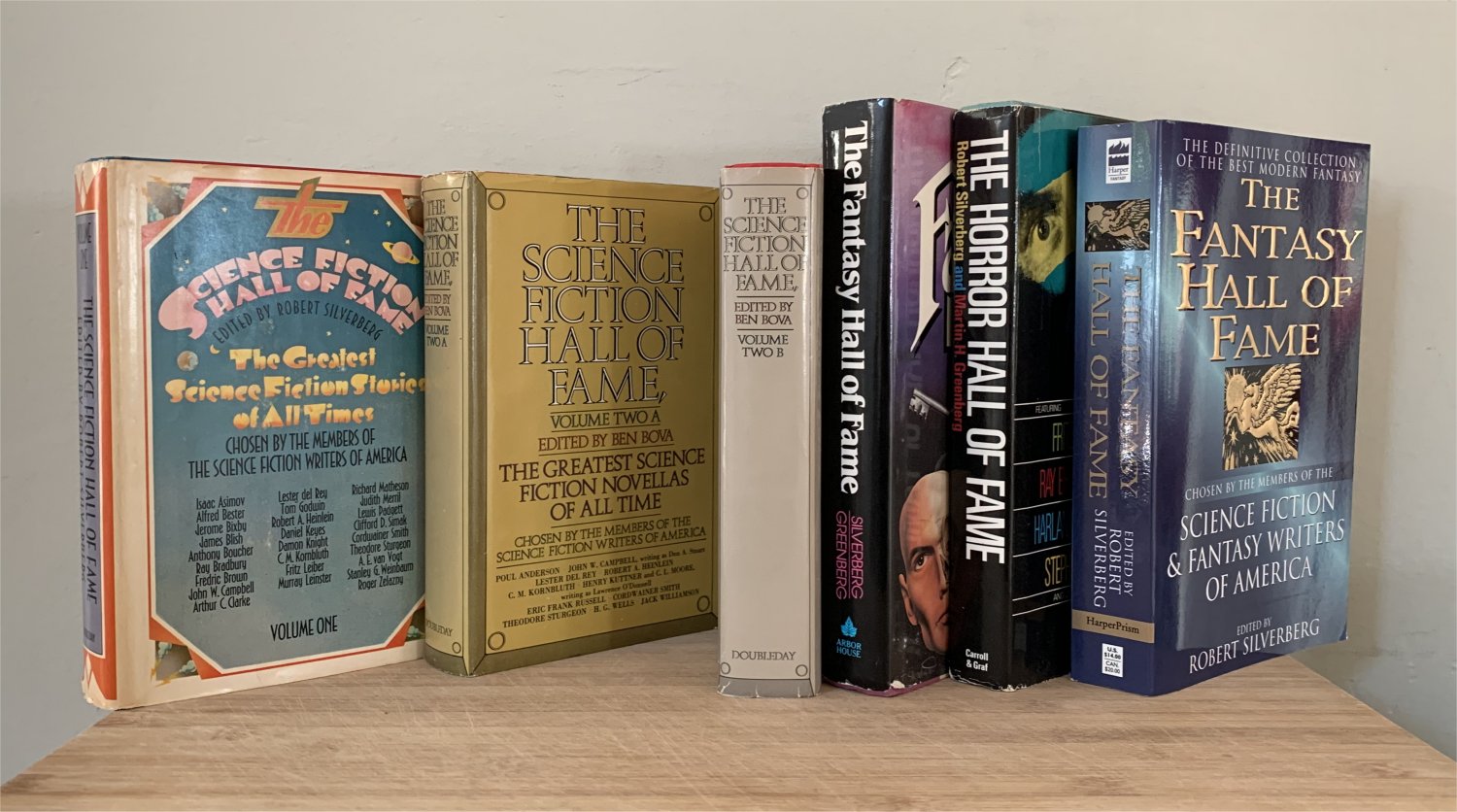 The initial volume of The Science Fiction Hall of Fame was designed by the Science Fiction Writers of America (SFWA), as it was known then, to recognize stories published before the advent of the Nebula Awards, which were first awarded in 1966 for works published in 1965.

Silverberg's introduction describes the process of conducting a survey of members for stories of up to 15,000 words published in 1964 or earlier. He also discusses some editorial decisions that were made to produce an anthology with no more than one story per author. (Thus, Arthur C. Clarke's "The Star" was omitted since another Clarke story placed higher in the survey.)

The result was, as Silverberg says, "as nearly definitive an anthology of modern science fiction stories as is likely to be compiled for quite some time." Indeed, this volume still leads many polls of all-time best SF anthologies, though its contents, now all at least 50 years old, no longer represents the literary maturity of the genre.

The second volume, edited by Ben Bova and split into two books (with more dignified cover typography compared to the cartoonish design of the first volume), includes longer stories, and were chosen by a similar process of polling SFWA members. As in Volume One, certain constraints made some of the voted stories unable to appear in the published volumes. These stories include Ray Bradbury's "The Fireman" (later expanded as Fahrenheit 451), Walter M. Miller, Jr.'s "A Canticle for Leibowitz" (later expanded into a novel of the same name), and Robert A. Heinlein's "By His Bootstraps" (since ground rules allowed only one story per author, and Heinlein's "Universe" was included instead). The second half of Volume Two presents stories that ranked lower in the SFWA membership polling than the stories in the first half of Volume Two, giving consideration, as Bova explains in his introduction, to those authors who ranked highest in overall popularity, often with multiple stories.

(There were two later volumes titled Science Fiction Hall of Fame, edited by Arthur C. Clarke and Terry Carr, but they simply collected Nebula winning stories from 1965 to 1974 and so are not included here.)

The first Fantasy Hall of Fame is analogous to the earlier Science Fiction volumes, in that the scope was limited to the year before the advent of the relevant award, in this case, the World Fantasy Awards first presented in 1975. Members of the World Fantasy Conventions in 1981 and 1982 were asked to vote for stories to be included in this anthology.

The Horror Hall of Fame was determined by the same member voting, though in this case the results include three stories published as late as 1981, so it's not strictly a supplement to the World Fantasy Awards as the Fantasy volume was.

The second Fantasy Hall of Fame has a subtitle, "Chosen by the Members of the Science Fiction and Fantasy Writers of America", which distinguishes it from the unmentioned-within earlier fantasy volume. It differs from all the previous Hall of Fame volumes in that it is not designed to supplement the history of any award, but rather to recognize the name change of the prior Science Fiction Writers of America (SFWA) to include fantasy, a change which occurred in 1992. A poll similar to those for the SF Halls of Fame was held of the current membership, with the scope extended to works published as late as 1990. (Though numerous fantasy stories had won the Nebula even before SFWA changed its name.) As in the earlier SF volumes, Silverberg's rules allowed one story per author; as he notes, otherwise Avram Davidson's "Or All the Sea with Oysters" would also have been included. There are just four overlaps with the previous fantasy volume: stories by Robert Bloch, Avram Davidson, L. Sprague de Camp, and Theodore Sturgeon.

(In the photo, the three SF Hall of Fame volumes are book club editions.)

Most reprinted authors: C.L. Moore and Theodore Sturgeon (5 each), then Ray Bradbury, Henry Kuttner, and Fritz Leiber (4 each).