Gold/Pohl/et al : Galaxy and If Anthologies 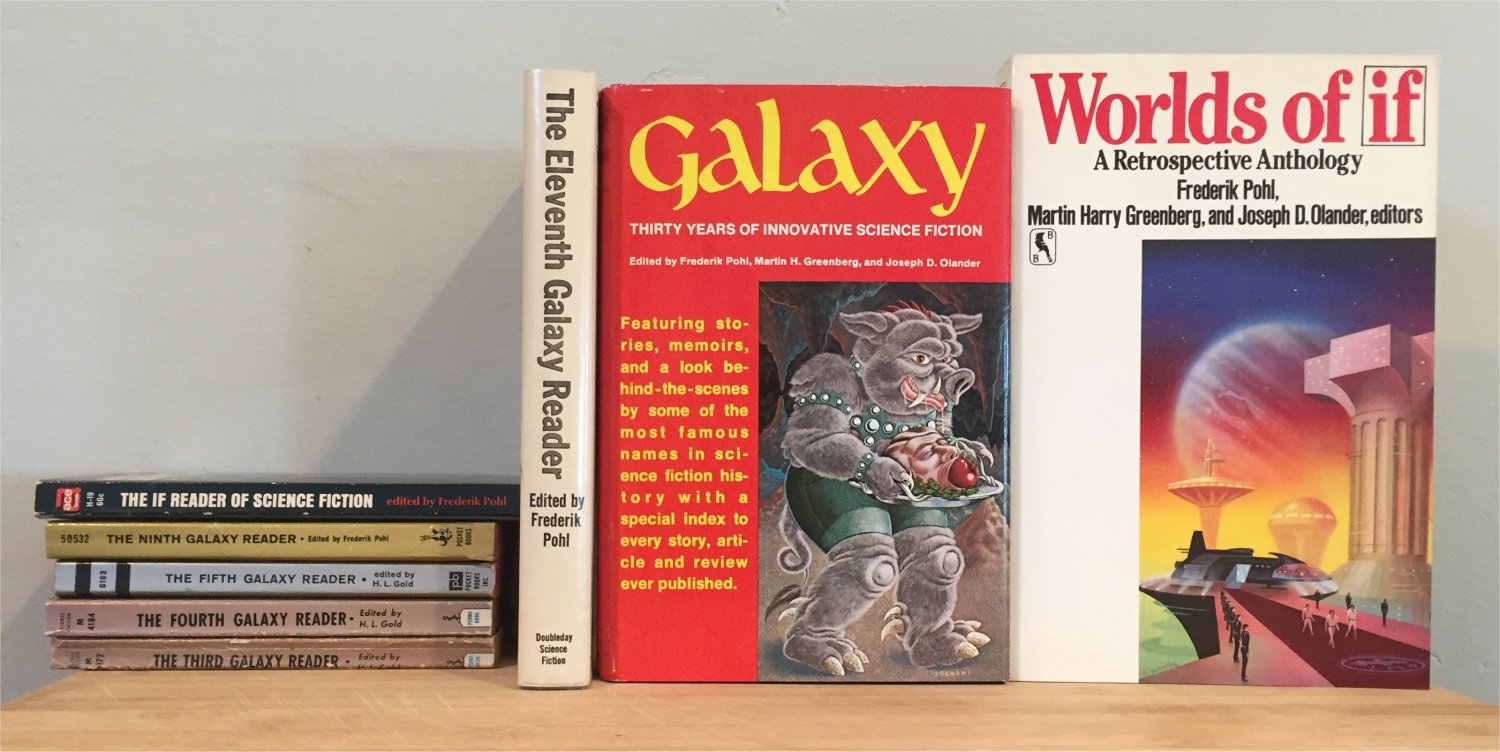 Galaxy Science Fiction launched in 1950 under the editorship of Horace L. Gold and became, along with Astounding/Analog and The Magazine of Fantasy & Science Fiction (F&SF), the three magazines that dominated SF for most of three decades. Gold's Galaxy, for some 11 years, emphasized 'soft' sciences like psychology and sociology, with regular humor and satire, in contrast with Astounding's techno-futurism (and in the '50s distractions of pseudo-sciences like Hubbard's Dianetics) and F&SF's literary blend of SF and fantasy.

As Boucher & McComas were doing at F&SF, Gold began a series of periodic (they were never quite annual) "Galaxy Reader" anthologies. The first two, published by Crown, were enormous 500-page volumes; with a move to Doubleday, the books became half that length.

Gold retired in 1961 and editorship was turned over to Frederik Pohl, a prolific contributor to the magazine during the '50s and an experienced anthologist for a decade. Pohl continued the Galaxy Readers through 1969, when he retired from the magazine.

If became Galaxy's companion magazine in the late 1950s under Gold's and then Pohl's editorship, though it had launched earlier, just a year and half after Galaxy did, in early 1952. Initial editor Paul W. Fairman gave way to James L. Quinn for seven years. Quinn, along with Eve Wulff, published two "Worlds of If" anthologies in 1957 and 1958. Once Pohl had taken over, he published one "Best Science Fiction from If" volume and then two "If Readers of Science Fiction."

After Pohl's retirement from magazine editing in 1969 (he was relaunching his writing career) the editorship of both magazines went to Ejler Jakobsson for five years and then to Jim Baen for another five years. During these years three volumes of "Best from If" and four of "Best from Galaxy" were published; the earlier volumes were credited merely to "Editors of" the magazine, but SFE and Isfdb both credit them to Jakobsson. The later volumes are credited to Baen.

Finally, the 1980s saw two substantial retrospective anthologies, one for each magazine, by Frederik Pohl and co-editors Greenberg and Olander. The Galaxy volume has interstitial material including essays by Pohl and Gold, memoirs about their stories by many of the authors, and a complete index of the magazine to 1979. The If volumes similarly has essays Pohl, Larry T. Shaw, and Barry Malzberg, and memoirs by many authors, though not an index of the magazine.

(The photo shows the two retrospective volumes, and a few earlier "Reader" anthologies, all but one (Eleventh) paperback or book club reprint editions.)