A Treasury of Great Science Fiction

This two-volume set from 1959 is included here as a "tome" anthology somewhat by default. Not because it doesn't include some excellent stories -- and four full-length novels -- and despite its editor's explicit claim in his introduction that the book "is not a definitive anthology ... not a scholarly survey ... not, indeed, any kind of shaped or patterned anthology, but simply a very large collection of stories which are (I think) of high quality and (I hope) unfamiliar to many readers." Thus, along with a number of still-famous stories, there are a few that have never again been reprinted since and have languished into obscurity.

The reason these volumes are a "tome" is that for many years it was an introductory selection for members of the US Science Fiction Book Club -- an attractive choice, if for no other reason, than containing those four full-length novels, all of them classic works -- and so book club editions of these achieved, among a certain generation of SF readers, far wider currency than any other contemporaneous anthologies.

This section of "Tomes" is called "Singletons" because they include major anthologies by editors who only produced one such anthology. 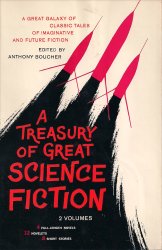 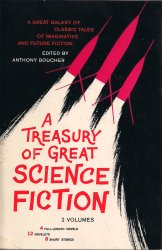