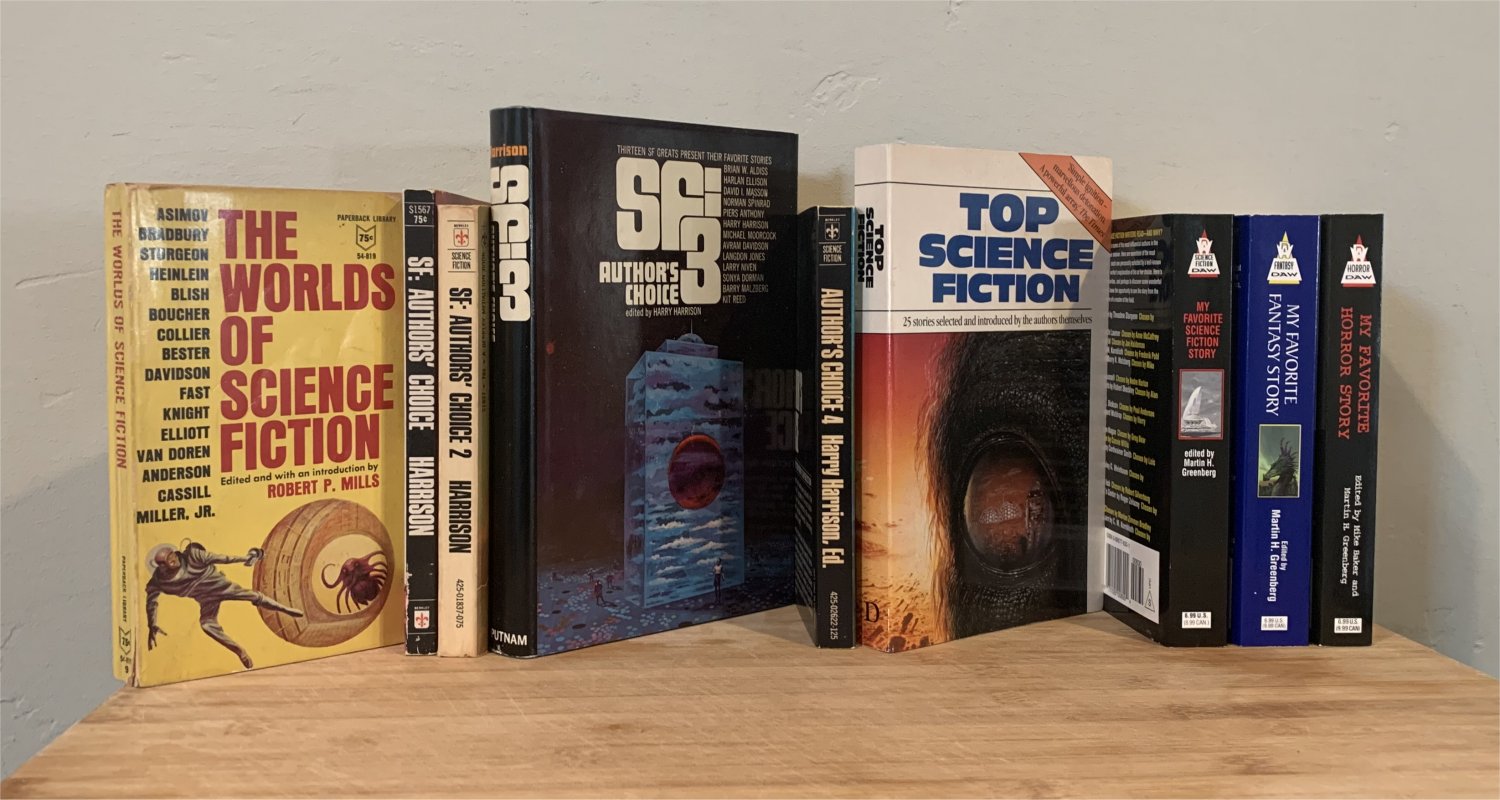 The first of these (not in the photo) is My Best Science Fiction Story from 1949, when Leo Margulies and Oscar J. Friend asked 25 SF authors for their own favorite stories. Results include an essay by each author explaining their choice.

In 1963 Robert P. Mills, editor of The Magazine of Fantasy and Science Fiction from 1958 to 1963, repeated the project in The Worlds of Science Fiction, with the main intent of providing "prime examples" of work being done in the "taboo-free field of science fantasy," with the "bonus" that each story is a favorite of its author. The are short statements from each other before the stories.

Later in the 1960s Harry Harrison asked contributors to SF: Authors' Choice to select a favorite story of their own, or one they were fond of that they felt had been overlooked, and preferably not anthologized before. He also gave them latitude to write sometimes long commentaries on their story's inspiration and development. The anthology rule was relaxed for the second volume. The third volume shifted focus to newer authors. The fourth ranged from Clarke to Tiptree. (The first two were paperback originals in the US, the third and fourth hardcovers; the photo shows the paperback reprint of volume 4.)

Then in the 1980s UK editor Josh Pachter queried over 100 SF writers (and then fantasy writers), inviting them to select their best, or favorite, or most representative stories for his Top anthologies. Twenty-five stories ended up in the SF volume, though a later Dutch edition (see isfdb link below) was expanded to include 48 stories, all included here. The fantasy volume has just 24 stories (including one by the editor). Author introductions explain their selections.

At the end of the century Martin H. Greenberg produced three My Favorite anthologies where he asked contributors to select their favorite story in a genre by another writer. Thus Clarke chose an SF story by Sturgeon, Haldeman one by Pohl, Pohl one by Kornbluth. (Unfortunately the TOCs at isfdb for the SF and fantasy volumes do not indicate the selectors.) Each selector provides a half-page or so introduction.

A couple authors changed their choices over the years; Frederik Pohl remained consistent, with "Day Million."